John Dewey’s Experience and Nature was published in 1925, but nearly all the available versions on the web and in print reproduce the 1929 edition.* The only real difference is the first chapter, which Dewey completely rewrote for the later edition. Dewey reportedly did the rewrite because people found the first chapter of the first edition confusing, and not very good as an introduction to the book. The differences between the two versions are substantial, both in content and ‘feel.’ I’m not sure which is better. 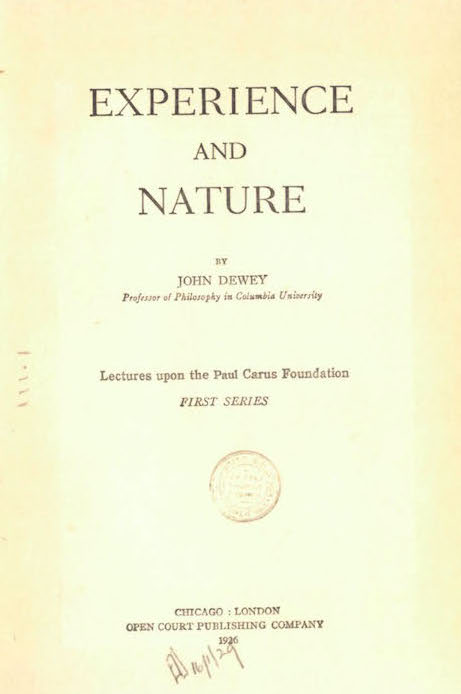 Here is a scan (3.5 mb) of the 1926 Open Court printing of the 1925 first chapter, from a copy in Fisher Library, University of Sydney. (It’s a very physically attractive book, worth seeking out if you can find it.) I’d not usually post scans of chapters on the web, but there are various free online copies of the 1929 edition now (e.g., this one through Guttenberg), and I think it’s important to have an easily available e-copy of the original chapter 1.

* The Southern Illinois University Press edition includes the 1925 Introduction as one of several helpful appendices to their reprinting of the 1929 version. These appendices also include Dewey’s draft of yet another version of the first chapter, written 1947-49.